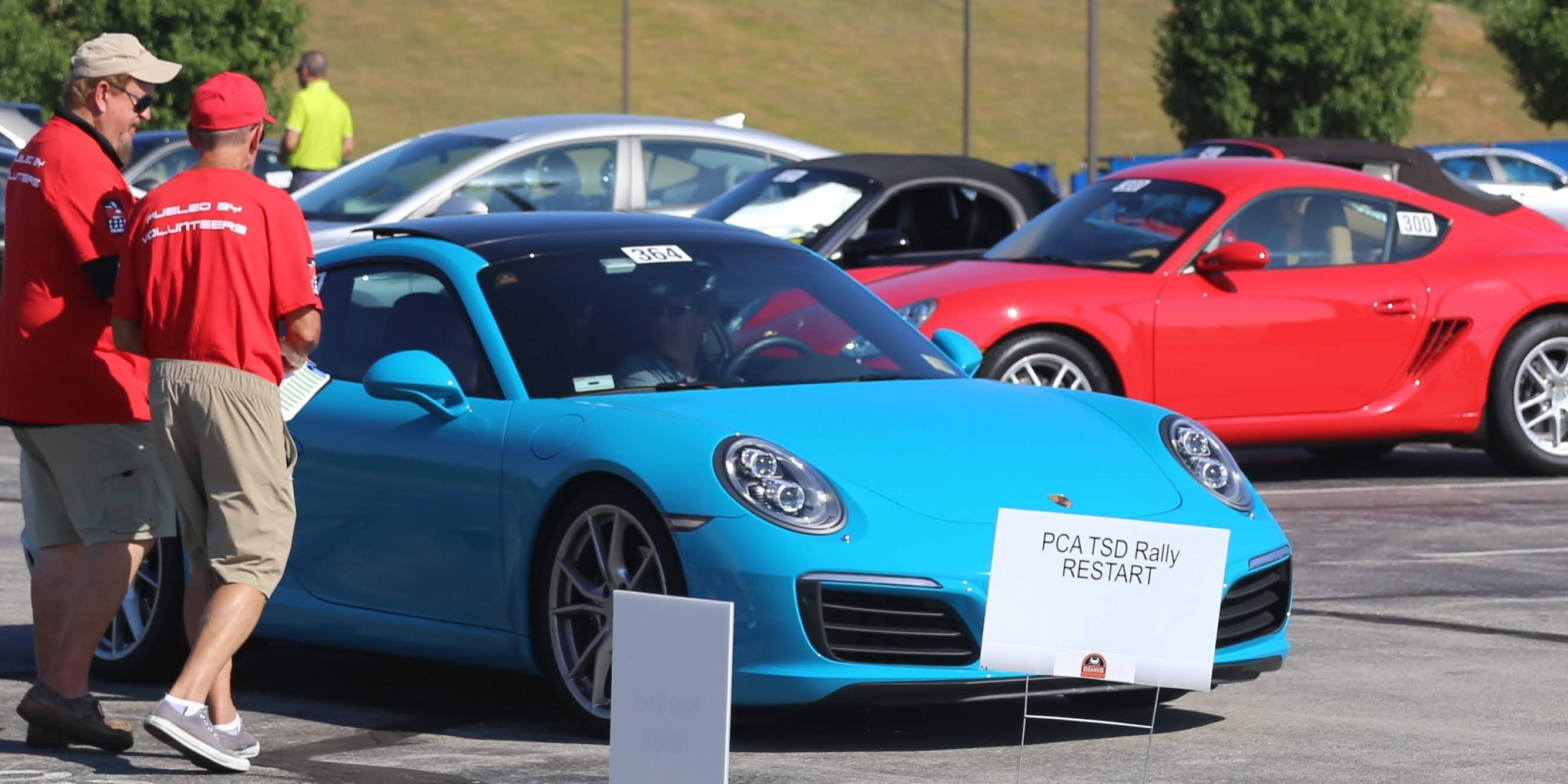 Two years ago, Bret and I followed the advice of Parade veterans and kept our first Parade at Jay Peak low key. As we progressed through the week, Bret wished we had competed in at least one event. Concours, auto-cross, tech quiz, and time, speed, distance (TSD) rally are the official competitive events of all Parades. The gimmick rally, art show, radio control cars are considered social competitions.

The TSD rally, also referred to as rally, is a precision driving event within posted speed limits. The event requires very little equipment to participate and couples compete equally. The navigator and driver have very different roles but equally challenging. When it was time to sign up for the 2018 Parade at Lake of the Ozarks, I checked the rally box with Bret as Driver. We competed in the new classification that allowed phone apps and tablets along with cars equipped with GPS. While I did not have any particular apps in mind, I wanted to compete with my phone in the car!

A couple weeks prior to Parade, Bret received an email from the rally co-chairs with the General Instructions, Rally Glossary, and suggested items to pack for the event. We were encouraged to read the Parade Competition Rules pertaining to the rally and attend rally school the day before the event.

Bret and I had some rally experience but never as a team. My goals for this rally would be simple: learn more about the event, stay on course, and have fun. The day before we departed Williamsburg, we printed the attachments and packed the navigator supplies. This was our summer vacation but we had a reading assignment to complete! Uncertainty about our decision began to creep in on the long ride to Missouri.

Like college students cramming for exams, Monday after concours began our rally preparation. We made a quick scan of the printed materials before rally school. We arrived at the ballroom to find various teams sharing rally stories. Once the doors opened, the crowd grew to approximately 150. Our presenter attempted to get through 93 charts in 90 minutes. The types of questions asked made it clear we were sitting with highly experienced participants. By the time Bret and I left the ballroom, our uncertainty had blossomed into full fledge panic. The rest of our evening was spent reading and preparing. We agreed to keep things simple. I will keep us on course. Bret will maintain the correct average speed.

Rally Day started on the wrong foot. We followed the route instructions to the starting point and got lost. Waze got us there but Bret already doubted my navigation ability. (Later, we heard others complaining the instructions were wrong.) We picked up our route instructions and began reading. I carefully read the first three segments highlighting the important points. We set off early on the odometer leg with the plan to finish reading as we waiting for our time out.

Once we set off on the rally, we focused hard on the task at hand. We learned that time anxiety had to be managed throughout as we encountered slow traffic and routes through towns. I really had no opportunity to enjoy the scenery because my focus was on route instructions, signs, and instrument readings. With each leg, we built confidence. By the time it was over, we felt good about our performance. Sure, we made some mistakes but we stayed on course. We felt it was a successful first rally.

Next, we had to return to the resort to submit our scorecards, which proved to be more challenging than expected. We were mentally

exhausted. The event consumed the day. The rally portion lasted five hours with average speeds as high as 60mph. We could not imagine doing this in older cars without air conditioning! Once Bret figured out how to enter our times on the scorecard, I was able to do the math. One point for each second over or under the time. We managed a 363. We had no idea what that meant in terms of the overall field.

The next morning we were shocked to learn we won third place in our classification! We had not planned on attending the Rally Banquet but now we’re getting trophies! We posted a “tickets wanted” note on the board and secured two later that day.

What lessons did we learn during our rally?

1) Read ALL of the route instructions before setting off. I read through the first three checkpoints thinking I would have plenty of time to read the rest later. WRONG!

2) Don’t pass without a clear view or you may blow by a checkpoint.

3) Read the competition rules before the event. If we had been highly competitive, we may need the edge to gain a few seconds and position.

4) Fill out the time delay slips before setting off and use them.

I am already looking forward to Boca Raton!

Melinda and Bret…so many trophies, so few hands!

4th Place Finisher? NO TROPHY FOR YOU!