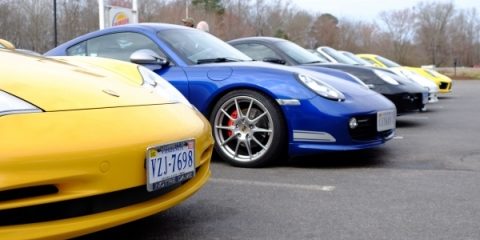 Porsche’s Prevailed!!  We had 14 cars and 27 people show up during stormy weather for our Spring fun run on May 19th.  No damage but our cars sure got dirty mostly from sand and dirt washed onto the roads.  The final tour route actually had two more new twisty roads than was planned. Then had a wonderful meal and time to visit afterward.

The route was changed twice because of flooded roads ahead. Along the way, we saved a turtle, saw a lot of buzzards, waited for two large geese to leave the road and saw a peacock at one of our unplanned stops to decide where to go next.

Many thanks to Pierre and Brian for leading groups. Bret for insight after the first flooded road. Vince who sometimes was the sweeper, sometimes not the actual last car in the caravan. Sam Fowler for some pictures and actually letting his new white Boxster get dirty.