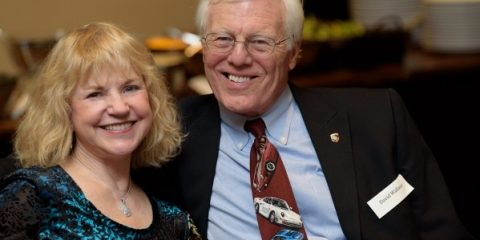 This year’s FSR New year Party was held January 13th, 2018 at the Kingsmill resort in Williamsburg. There was a nice turnout for an evening of fun, camaraderie, great food and, new this year, live jazz and dancing to the sounds of the very talented and versatile musicians of “Limelight”. Even the weather cooperated, with the rain holding off on Saturday and Sunday morning dawning beautifully clear and bright.

The now famous “White Elephant Auction” brought out an interesting collection of items and an enthusiastic group of bidders. In the end, $3,455 was raised for the FSR charity efforts, a truly wonderful way to kick off the New year. Thanks to everyone for their generosity!

Josie Grandfield discussed FSR’s charity campaign for the upcoming year, noting that for 2018 FSR has chosen to support Habitat for Heroes, a subset of Habitat for Humanity that helps create affordable housing solutions for Veteran and active-duty military families in our community, while Mark Hugel gave a detailed presentation on the program. FSR will continue to support Horizons Hampton Roads by supporting their March 25th fund raising event at Top Golf in Virginia Beach. Finally, we will continue supporting the Food Bank of Southeastern Virginia and the Eastern Shore through our annual “Turkeys in the Trunk” event in November.

As with all FSR events, this one could not be a success without the voluntary contributions of several FSR members. Jerry and Kathy Kent did the table decorations, Phil and Josie Grandfield set up the White Elephant Auction, George and Pam Michaels arranged for the band and printed the programs and Vince Canepa made the “tent” cards and built the video.

See you all next year!

Doug and Joyce having an awesome time.

Jenny and Jacob Kay showing off their party hats!

Jenny and Jacob showing off their party hats!