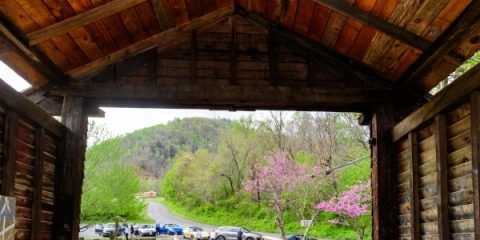 The English translation of the German word ‘Treffen’ is ‘meeting’; and the recent PCA sponsored Treffen event in Asheville was quite a meeting. Twenty-six First Settlers members made the trip in late September to enjoy some Fall foliage and a gathering of 300 Porsches at the historic Grove Park Inn. It was a great time and I see more Treffen’s in our future!

Begun in 2005, and formerly known as Porsche escape, this nationally sponsored event has grown in interest and is called Treffen North America. It is intended as a shortened, non-competitive version of Porsche Parade. The locations are intended as a geographical alternative to Parade and usually on the ‘opposite coast’. Because the registration is limited and doesn’t require facilities for a Concours and autocross Treffen’s are able to fit into smaller venues to include the historic Grove Park Inn in Asheville. But more about that later.

The first escape was held in the Wine County of Santa Rosa CA. Other locations have included the Finger Lakes NV, Baltimore, Albuquerque, Dayton, Sun Peaks British Columbia, Flagstaff, Eureka Springs, Los Angeles, Orlando, and Rapid City. The first Treffen was in 2016 at Lake Tahoe. 2017 doubled the fun with the first event in the Texas Hill Country and the second closer to home in North Carolina. The 2018 events are scheduled at the Tamaya Resort in Santa Ana Pueblos, NM on April 25-29th and the Fairmont Banff Springs Resort September 12-16th in Banff.

Alberta north of the border. Wish we could make it to both of them; along with Parade at the Lake of the Ozarks too!

You can think of Treffen as an “eat, drive, eat” kind of event. Registration opened on Wednesday and included a Welcome reception on the back patio of the Grove Park Inn. What a view! The days include a variety of drives to include a run to the “Tail of dragon”, tours to a motorcycle museum and the Cradle of Forestry. Other eclectic options included the Art & Chocolate tour, the Funky Junk Tour and the Brew City tour. Another favorite was the White Water rafting and Guided Waterfall Tours. The last one included scenes from the “Last of the Mohicans” movie.

The schedule allowed everyone to pick and choose what they wanted to do. But we did coordinate a group tour to the Lake Lure Inn and Boat Tour that was a lot of fun. We barely scratched the surface of the great roads in the North Carolina mountains. You could easily spend a week just driving the great mountain roads within an hour of Asheville. We also coordinated on the trip into downtown Asheville for dinner on one of the nights.

Another local highlight was a trip to America’s House – if you happen to be a billionaire. The Biltmore estate is not to be missed if you’re anywhere around Asheville. Biltmore House, the main residence, is a ‘Chateauesque-style’ mansion built by George Washington Vanderbilt between 1889 and 1895 and is the largest privately owned house in the United States. Still owned by George Vanderbilt’s descendants, it stands today as one of the most prominent remaining examples of the Gilded Age. Members of the family lived in the house until 1956 and, in case you’re interested, is valued at $157 million.

Though we didn’t sleep in the Biltmore, the Grove Park Inn is a very cool second option. It’s proof that “Big Pharma” isn’t a new business phenomena. Edwin Wiley Grove purchased a pharmacy in Paris ,Tennessee just after the Civil War while in his mid-twenties. He invented Grove’s Tasteless Chill Tonic as a quinine to prevent malaria. It sold better than Coca-Cola and made young Edwin a very rich man. He partnered with another pharmacy innovator from Detroit named Fred Seely. Together the two men ventured into real estate in 1909, buying the 408 acres in North Asheville that would become Grove Park Inn. Four-hundred men worked 10-hour shifts six days a week. With only the use of mules, wagons and ropes, granite boulders, some weighing as much as 10,000 pounds, were hauled from Sunset Mountain to build the hotel. Seely kept his promise to be open for business in less than one year from the ground breaking.

Just three days shy of one year, The Grove Park Inn opened on July 12, 1913. Secretary of State, William Jennings Bryan, delivered the keynote address to four hundred of the most distinguished men of the South, gathered for the opening banquet. He had no idea of how true his words would become when he proclaimed that The Grove Park Inn “was built for the ages”.

Today, the Grove Park Inn remains a classic, old-school stone structure with massive fireplaces and a world class spa. It is a great place to host a Porsche ‘meeting’. We met PCA members from as far away as Washington state and New Mexico. In fact, we met the organizers of the Treffen Tamaya scheduled for April in New Mexico. A key difference between Treffen and Parade is the smaller events are run by the local region – not the National Staff. The locals from the Appalachian region were great hosts and did a fantastic job with the planning, organization and execution of the weekend. Appalachian is a small region and I think they were outnumbered by the visitors!

One downside of the Treffen model, compared to Parade, is the lack of any large gatherings of cars. A highlight of Parade is the Concours and displays of historic Porsches. Another is watching the competition at the autocross. The only places to see the great collection of cars was in the parking garage of the hotel and the rendezvous point for the fun runs at the local mall.

The key to attending future Treffens is to plan ahead. Treffen Asheville sold out in 53 minutes!! Registration for Tamaya will mostly have come and gone by the time you read this; but we might have time to sign up for Banff! As cool as the Grove Park Inn and western North Carolina are the Fairmont Banff and the Canadian Rockies will be over the top! Hey, maybe we can get on the list to host a Treffen Williamsburg.

Members enjoyed the beautiful waterfalls while at Treffen.

Luana relaxing before the next event.